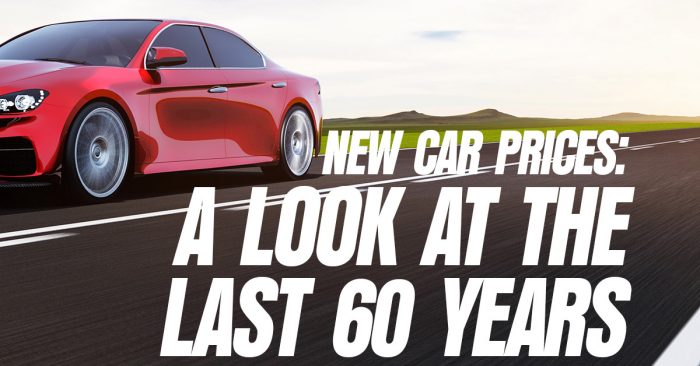 This was an exciting time for new cars in the US with the debut of the Mustang, Camaro and Pony and Muscle cars. In the early part of the decade, car prices averaged about $2,700 with cars near the end of the decade topping $4,000. Gas prices through the 1960s hovered around 30 cents per gallon, making fuel mileage an afterthought. Drivers wanted fast, sexy cars.

The 1970s were responsible for some significant changes, as oil shortages transitioned us from muscle cars to more fuel-efficient models. The average gallon of gas rose from about 35 cents to over $1 per gallon through the decade. The average price of a new car in 1975 was about $4,800. For the first time, fuel prices began impacting our choice of new cars.

In the 1980s, car-makers were challenged with making cars that could achieve 20 mpg. The decade also saw average new car prices rise significantly to $7,000-$8,000. We began to see the impact of alternative fuel vehicles in the market, although they were rare.

Average income was rising for American families in the 1990s and so were new car prices. The decade started out with new car prices averaging about $12,000 but by the new Millennium, car prices were touching the $20,000 mark. Electric vehicles started becoming at least a factor in auto sales and pricing.

New trucks and SUV sales exceeded that of sedans through the decade fueling the rise of average new vehicle prices to $37,000. Carbon fueled vehicles still dominate, but electric cars are not only becoming more common, but more powerful and have greater ranges.

While we may complain about our seemingly ever-increasing auto insurance rates, we may not take into consideration that we are purchasing ever increasingly expensive vehicles. These more expensive vehicles are more costly to repair. That doesn’t mean you can’t take steps to save on your auto insurance. Using one of our independent auto insurance agents is a terrific first step. While we can do the shopping for you, the final decision is yours. Contact us for a no obligation car insurance review and quote. You probably price compare when buying a new car. You should do the same when insuring that car. We look forward to assisting you.

Things You May Not Know About Radio

Want an SUV? Could It Be a Porsche?

Your Life Insurance Application Can Be Your Guide to Living Longer

Is Auto Insurance Really That Complicated?

3 Easy Ways to Save on Your Home Insurance