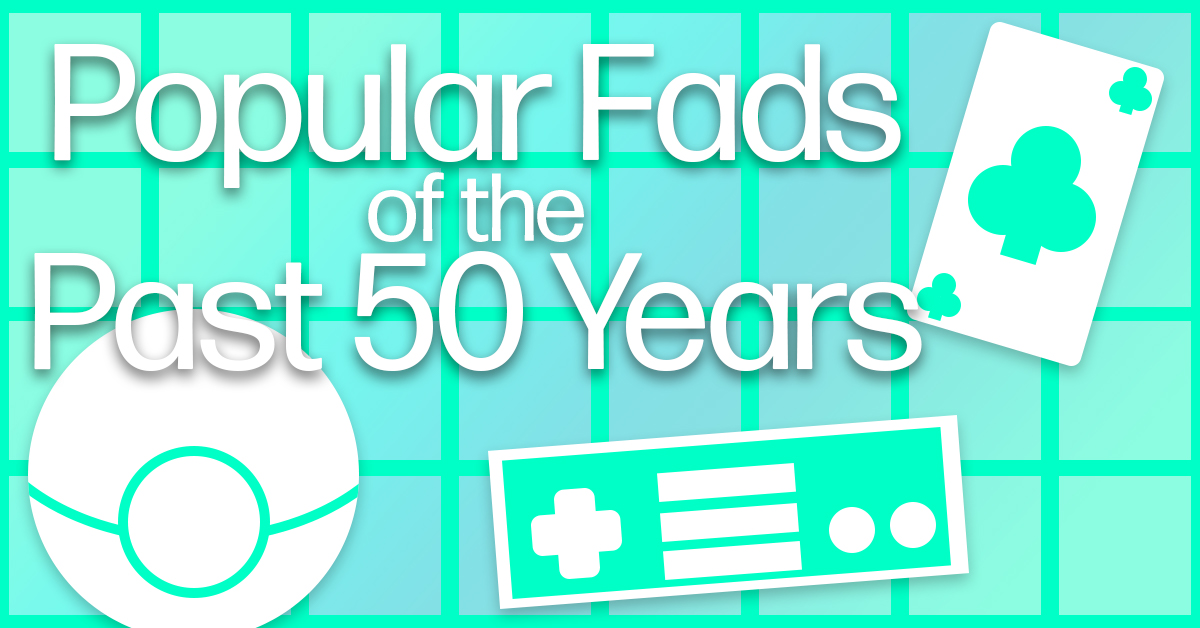 For some, 50 years is a lifetime. For others, it is a generation. Young people can’t even imagine a half century. Yet, as time marches on, every decade has its own hot topics and fads. These are trends that although fleeting, often define a certain period of time. Here are the most significant fads of the past fifty years.

The Seventies will be known for Disco and Pet Rocks. Pet rocks were pretty much smooth rocks with facial features glued onto them. They were packaged in boxes and, yes, millions were sold. Disco music was beat oriented music responsible for the rise of the Bee Gees and the movie Saturday Night Fever. Yeah, people look fondly back on the 1960s as the decade of Peace and Love. The 70’s? Not so much. It did, however, finish with Cabbage Patch Kids.

Beyond Hacky Sacks and Koosh Balls, the 1980’s were filled with fashion trends most would rather forget. There were Jelly Shoes and shoulder pads. Girls crimped their hair, a lot, and parachute pants landed, mostly with a thump. If you remember leg warmers, mullets and slap bracelets you indeed, were a child of the 80’s.

Good thing by the 1990s we learned our lesson with fads. We moved on to more substantial interests like Beanie Babies, Grunge, Boy Bands and video gaming. Alright, let’s give video gaming its dues. But Beanie Babies and Boy Bands? Bye, bye, bye.

The 2000’s started with a plethora of one-word fads including Bratz, Grillz, Crocs, Heelys and Ipods. There was MySpace, Razor Scooters, Speed Dating and OMG did Texas Hold’Em Poker become a big thing. This was the dawn of energy drinks and Fantasy Football Leagues. Give Fantasy Football credit for its staying power.

Technology played a big role in 2010 fads with self-balancing boards and video games like MineCraft and the virtual Pokeman Go. The 2010’s were diverse when it came to fads like the ALS Ice Challenge, and dance crazes like “The Floss”, “Twerking”, “The Harlem Shake”. There was fidget spinning, Tebowing, planking and hipster beards. “Viral” became viral in the 2010’s and everybody was looking to become an internet star or influencer.

A new decade will no doubt bring its own fads and trends, most of which, we will look back with a bit of embarrassment. Fads, by definition, are not generally sustainable, although we do maintain some of their qualities on rare occasions. Pogs and day-glo fashions may never see a comeback but plenty of us still play fantasy sports and poker. What’s next?

Whether its Barbie Dolls or Shopkins, every generation has its fads. They are fun to keep up with and particularly important if you have a child who gets involved with them. As adults, however, we need to recognize the difference between these fads and solid, financial decisions that can affect our future. Insurance should play an important role in the protection of your financial future.

To learn more, contact our loss-prevention professionals. Whether its life, auto, homeowners’ or health insurance, we can help you make solid decisions that can last a lifetime.

Preparing Your Home for a Natural Disaster

Why Are Mountains and Beaches so Popular for Vacationers?

Steps to Better Secure Your Bricks and Mortar Business

A Closer Look at the Life Insurance Waiver of Premium Benefit

Why A Police Report is Important in an Auto Insurance Claim

Why You Need to Document What Your Own

The Allure of the Great Smoky Mountains